Co-Director and Scriptwriter:  Karleen Pendleton Jiménez
Karleen recently completed the short film Butch Coyolxauhqui (2016) looking at queer body image, fatphobia, and reclamation.  Karleen has written three books: Are You a Boy or a Girl? (2000), How to Get a Girl Pregnant (2011) and Tomboys and Other Gender Heroes (2016). The first two were finalists for the Lambda Literary Award. She is the screenwriter for the award-winning animation short Tomboy.  Her short stories and personal essays have been published in numerous anthologies and magazines, including “Downtown” in Queers Were Here: Heroes and Icons of Queer Canada (2016), “Letter to My Queer Family,” in Women Writing Letters (2015), “‘Tell Them You’re a Mexican,’ and Other Motherly Advice” in Mother of Invention (2013). She currently teaches at Trent University in Peterborough, Ontario and is Chair of the National Association of Chicana and Chicano Studies, U.S.

Co-Director and Design: Janet romero-leiva is a queer feminist latinx visual artist and writer whose work explores immigrant displacement, denied aboriginality, and the experience of living between the south and the north, between spanish and english, between memory and truth. 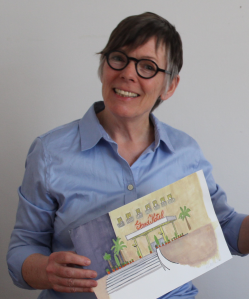 Co-Director and Animator: Barb Taylor
Animator Barb Taylor has created a number of award winning short films and innovative digital stories. Her film Tomboy which explores bullying and gender expression was the recipient of the CBC Canadian Reflection Award among others. Barb has just completed a hand painted animated short Bobbi and Sheelagh, a portrait of a young woman who overcomes her fears when she meets a mythological creature. She’s currently working on her first feature film.

Producer:  Madi Piller is a filmmaker, animator, programmer and independent curator currently living and working in Toronto. She is an experienced Canadian animation programmer and led the artistic direction and studio production at the Toronto Animated Image Society from 2002-2015. Madi continues creating programs and supporting production activities at her studio PIX FILM Productions in Toronto as well as around the world. She is familiar with the global independent animation scene and often can be found curating groups of artists in international cities.

This is a text widget, which allows you to add text or HTML to your sidebar. You can use them to display text, links, images, HTML, or a combination of these. Edit them in the Widget section of the Customizer.
Loading Comments...
%d bloggers like this: